An erosion can completely modify our natural landscape.  It is described as a gradual deconstruction or diminution over a period of time.  This process happens through wind, water, or other elements of nature.  Nature builds land, only for it to disintegrate later on in the process.  It becomes this continuing cycle of land constantly being reformed year after year.

To dive further into this process, let’s look at this rock formation here in Bailey’s Hill.  This monstrous landscape sits around the Atlantic Ocean where bits of rocks are slowly chipped away over time.  Long cracks scatter throughout, dividing the rocks further away from each other.  Small tides open up from the bottom where organisms like barnacles claim their habitat.  The landmark continues to disintegrate over time as the waves continue to crash against the structure.  Strong winds push the waves farther out, grabbing yet another piece to carry out into the ocean.

And in that moment, you realize that this process didn’t change in just one day alone.  This erosion has been happening for THOUSANDS upon THOUSANDS of years.  Years of heavy winds, huge waves, and other chaotic scenes of nature crafted this marvelous structure.  Nature itself caused this rock structure to become what it is today.  Human beings did not cause this to happen, for it would be impossible for man to modify something of this magnitude.

As you stare into the scene in front of you, you start to realize how much of nature we truly take for granted.  You look right into the picture and can’t imagine how much change has happened in a matter of years.  Water, wind, soil, rocks, and many other natural elements played a key role in how Bailey’s Hill was formed.  And yet, this erosion will continue to happen as time goes on.

This is not some special environmental phenomenon that was just discovered – you know very well that this process happens all over the world.  From the oceans of Massachusetts to the glaciers of Canada, every type of landscape goes through some form of erosion.

An erosion is not seen as good or bad, but rather, just one of many complex processes of life.  Life itself is happening right before your eyes.  It may be a sluggish process, but the erosion is a magnificent process to experience.

So what lies ahead for the stunning rock formation here on Bailey’s Hill?  Will this structure grow even higher?  Or will the erosion continue divide the sections up further from each other?

There is no telling what Bailey’s Hill will look like from now.  We will just have to wait to see what it looks like, thousands of years later.

ATTENTION ALERT!  We have just received a special message sealed inside a bottle.  The front side is labeled ‘12/15/16 – ????’ and provides no explanation about the date.  The message has been taken out and it reads,

‘An All-Star concert was held at Wembley Stadium in London in memory of Freddie Mercury on April 20th, 1992’.

So…that was rather interesting.  A Freddie Mercury concert that was held at Wembley Stadium in London.  What does this even mean?  Does this clue hold a real meaning to the secret category?  And what’s the new date have anything to do with it? Well for starters, let’s back up a bit and discuss what this clue entails.  Freddie Mercury was the lead singer for Queen, a popular rock band that started in the 1970s.  Mercury had a flamboyant stage persona and was considered one of the greatest vocalists of all time.  Some of his most infamous songs he wrote for Queen were Killer Queen, Somebody to Love, Bohemian Rhapsody, Don’t Stop Me Now, Crazy Little Thing Called Love, and other famous hits.

Decades after Queen’s success, Freddie Mercury was diagnosed with AIDS in 1987.  He made very few appearances on stage after his diagnosis.  His health was slowly deteriorating and died at the age of 45 on November 24th, 1991.  It has been years after his death and Freddie’s work with Queen remains relevant to this day. 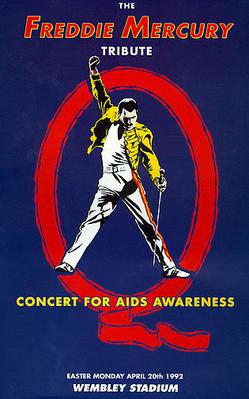 The first half provided short sets of Queen’s music from bands that were heavily influenced by their work.  Such bands included Extreme, Metallica, Def Leppard, and Guns N’Roses.  Several video clips honoring Freddie Mercury’s work were shown while roadies changed the stage for certain bands performing.  In the second half of the show, three of the remaining members of Queen (John Deacon, Brian May, and Roger Taylor) performed alongside with guest singers and guitarists.  Some of these special guests included Elton John, Seal, Paul Young, George Michael, Liza Minnelli, and many other famous musicians.

And there you have it, that’s the basic info about the clue inside the bottle.  That clue had to do with Freddie Mercury’s tribute concert that happened on April 20th, 1992.  After re-reading the clue a few times, we still don’t know where this is leading us.  What’s the deal with these special dates?  Is there a particular reason why ‘Easter Monday’ was pointed out in the findings?

Music is already one of a few categories on MakeSandcastlesNotWar, so where does that leave us?  Could there be a special sub-category of music in the works?  As far as we know, no new information has been presented to us other than that message in the bottle.  December 15th seems to keep popping up in the riddle since the statements last week.  Only thing we can do now is wait to see what’s in store for us next in the coming weeks!

Every year we announce the Nobel Peace Prize to someone who completed incredible work in promoting peace within a nation.  Now that the months of 2016 are winding down, it was time to reveal the winner.  This year’s winner was Juan Manuel Santos, the current President of Columbia.  Juan Manuel Santos was named the winner for negotiating a peace treaty with the guerrillas in the country.  It was one small step for a giant leap into the right direction for Columbia.

Singer and song-writer Bob Dylan was awarded the Nobel Prize in Literature.  Dylan was the first American since 1993 to win the prize after famed novelist Toni Morrison.  At 75 years old, Dylan had a shot at winning the award even though his line of work didn’t meet the typical criteria.  With music signaling a broader definition on the concept of literature, it seems that the times they are a changin.

Bob Dylan is a talented singer and song-writer, releasing 37 studio albums during his career.  He released his first album Bob Dylan in 1962 and his most recent album Fallen Angels was released on May 20th, 2016.  Other than winning the Nobel Prize in Literature, Bob Dylan has won numerous awards for his songwriting and performances.  Over four decades later and his legacy still lives on as one of the greatest musicians of all time.

Kudos to Bob Dylan for winning the Nobel Prize in Literature!  Bob has written incredible music over the years and he continues on his work to this day.  I have heard a few songs from Bob Dylan like Blowin in the Wind and The Times They Are a-Changin, which were both great to hear.

What’s also interesting to note is how literature is extending towards music as written work.  Music has always composed of lyrics, but now Bob Dylan’s poetic songs have been recognized for the Nobel Prize in Literature this year.  Lyrics can be written works, since they are words written within the tunes created for a song.  Rock, hip-hop, metal, jazz, and other music genres have lyrics incorporated into songs to provide a more meaningful experience.  Music plays a huge part in literature, even when there are no lyrics to a specific song.  Sometimes all it takes is an instrumental song to captivate an underlying story you are presenting to your audience.  Just like Bob Dylan’s poetic lyrics, we will see many works of music blowin in the wind each day.